I recently decided to buy some headphones for mixing and mastering so I thought I’d share my discoveries. And since there is a wealth of knowledge and user reviews already out there I’d spare you the comparisons and talk more about my process of elimination.

So first I did a lot of research on headphones that were mentioned in forums such as Gearslutz and Head-Fi as well as asking fellow music producers and sound engineers but found a lot of reviews and opinions were somewhat contradictory.

I should add that depending on where you are getting your info from beware of the pseudo-science and marketing. And take subjective opinions with a pinch of salt. (Including mine)

I’d whittled it down to what many have described as the “clinical, artificial, accurate, neutral, flat and great for mastering”, AKG K702’s and the “fun, non-fatiguing, great stereo imaging, slightly “veiled” Senhiesser HD 650

So what you want for mastering and mixing is accurate headphones that will translate your mixes and masters well to other speakers right?

Find out what happened when I listened to them…

Next I arranged some listening sessions as some local retailers. I managed to try out the HD 650’s and the 701’s

When it came to testing the HD 650’s against the AKG 701’s there was really no contest for me. I was able to AB test them in the same shop from the same amp. I should add that when headphones are fresh out of box and haven’t been “burnt in” the top end will sound a bit harsh so please allow for this when considering.

(“Burning in” will smooth out the highend a fair bit)

The 650’s won hands down. They sounded somewhat more full bodied and balanced. Like I’ve heard one reviewer say “they sound like a pair of speakers in front of you” whereas the AKG’s somehow felt more extreme in the imaging and the sound didn’t glue together so much.

Another thing was the bass response. The HD 650’s to me sound very flat, but the AKG’s seemed to be a bit weak in the bass, although they did seem to sound like the bass could be heard at very low frequencies. In comparison to the HD 650’s the overall sound was a bit thin.

Okay I won’t go into more detail here because you can find much better reviews here at Headphonia and all over the web in fact.

I will end on this…

The absolute best advice and only way to find some cans that you’ll be happy with is to actually go listen to them for yourself.

Ignore the hype, due to the subjective nature of sound only you will know what works for you.

So can you see how I made assumptions based on what I’d read about the AKG’s? On paper they seemed like the serious reference tool that I needed, but in practice they just weren’t for me. 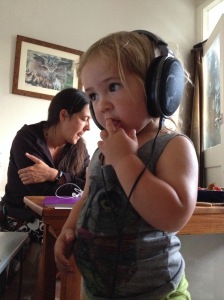 Sound, music, technology and being a dad is what I love. View all posts by rosswinter